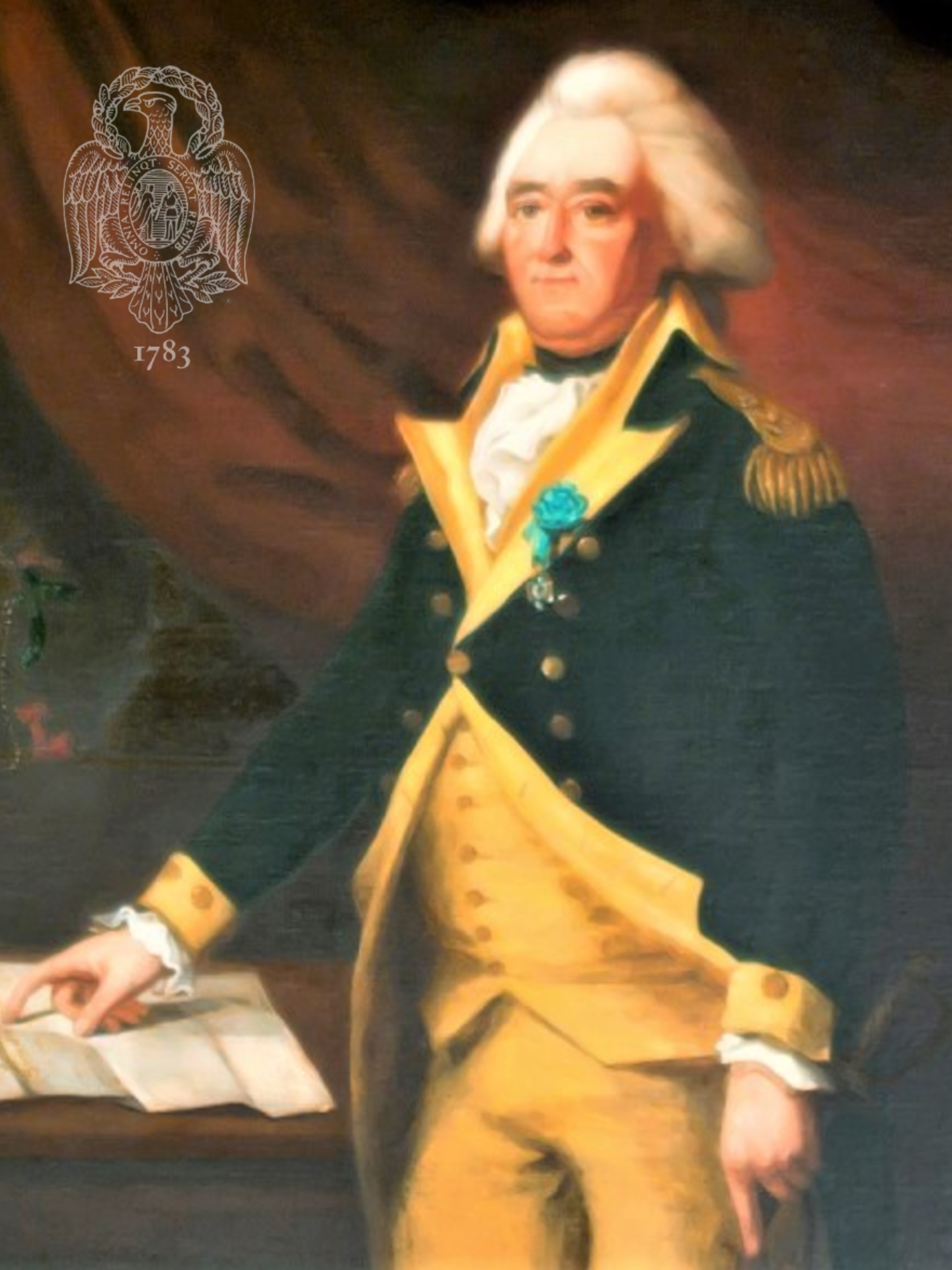 Of all Pennsylvania’s soldiers, Anthony Wayne most universally personifies our ideal images of the Founder who was also a Fighter, and he still commands international recognition.

Anthony, son of Isaac and Elizabeth (Iddings) Wayne, was born in Easttown Township, Chester County, on 1 January 1745. The family, although of English origin, emigrated to Pennsylvania from Ireland about 1724 and brought with them a tradition of military service. The family was established at “Waynesborough”, which was farmed profitably, and the family also operated a successful tannery. Isaac Wayne sat in the Provincial Assembly and was active in local politics, and he saw that Anthony was given a good education at the academy of Gilbert Wayne, Isaac’s brother. Anthony worked as a surveyor and was sent at the age of twenty-one to Nova Scotia to survey for a speculative land company of Philadelphia. That failing, he returned home and on 25 March 1766 was married to Mary (1746-1793), daughter of Bartholomew and Mary (Kirll) Penrose of Philadelphia. Anthony and Mary (Penrose) Wayne had two children, Isaac (1768-1852) and Margaretta (1770-1810), the wife of William Richardson Atlee. Mary was the sister of Colonel Joseph Penrose of the Tenth Pennsylvania Regiment, and another sister, Sarah, was the wife of Abraham Robinson of Philadelphia. Anthony Wayne’s sister Hannah became the wife of William Van Lear; they were the parents of Captain William Van Lear [an Original Member of the Society]. Both the genealogical and social relationships of the family were extensive in southeastern Pennsylvania.

Anthony Wayne was an active Patriot from the beginning of the Revolutionary movement in Pennsylvania. His engagements at first were local; e.g., he represented Chester County in the provincial assembly of 1775, but on 3 January 1776 he was ap-pointed Colonel of the Fourth Pennsylvania Battalion, the beginning his Continental service, not to be followed here in detail, as it has been described in the historical portion of this study. From the nadir of Paoli on 20 September 1777, Wayne’s military fortunes rose to the great moral victory of the taking of Stony Point on 16 July 1779, for which he received a gold medal, the thanks both of Congress and the Pennsylvania Assembly, and a slight wound. The performance of his troops in the South was all that he could have wished; he was again wounded during the Yorktown Campaign, albeit by friendly fire, and he became a perpetual hero to the people of Georgia in 1782.

Wayne’s relationship with his men was charismatic, yet he was a disciplinarian whose actions may appear ruthless to Twentieth Century sensibilities. Such were his dealings with mutineers at Fort Ticonderoga in the winter of 1776-1777, and at York in May 1781. He insisted on his men presenting a military and uniform appearance. He stole food and clothing for his troops, and he inspired their confidence and loyalty, best illustrated in the events of the Mutiny of the Pennsylvania Line in January 1781.

In 1777 when made a Brigadier General Wayne, was at a further remove from his men. Although referred to as “commander” of the Pennsylvania Line, Wayne, technically, never held that post. Major General Arthur St. Clair commanded the Line throughout the war by virtue of his seniority. In July 1777 St. Clair abandoned Fort Ticonderoga in the face of a British advance. Although cleared by a court martial, St. Clair never held an important military assignment afterwards and was looked upon with suspicion by many. Plagued by ill-health, gouty, concerned also for wife’s health, St. Clair perforce took a back seat to Wayne. The military jealousy and ill-feeling between the two men is one of the great tragedies of Pennsylvania’s Revolutionary history.

The opinions of two capable military men who knew Wayne are of interest. In 1792, when considering a new Commander of the United States Army, George Washington wrote of Wayne,

More active and enterprising than Judicious and cautious. No oeconomist it is feared. Open to flattery; easily imposed upon; and liable to be drawn into scrapes. Too indulgent (the effect perhaps of some of the causes just mentioned) to his Officers and men. Whether sober, or a little addicted to the bottle, I know not.

At about the same time, or a little later, Henry Lee (“Light Horse Harry”) of Virginia began gathering materials for his history of The American Revolution in the South. He said of Wayne,

General Wayne had a constitutional attachment to the decision of the sword, and this cast of character had acquired strength from indulgence, as well as from the native temper of the troops he commanded. They were known by the designation of the line of Pennsylvania; whereas they might have been with more propriety called the line of Ireland. Bold and daring, they were impatient and refractory; and would always prefer an appeal to the bayonet, to a toilsome march. Restless under the want of food and whiskey, adverse to absence from their baggage; and attached to the pleasures of the table; Wayne and his brigade were more encumbered with wagons than any equal portion of the army. The general and his soldiers were singularly fitted for close and stubborn action, hand to hand, in the centre of the army; but very little adaped to the prompt and toilsome service to which La Fayette was and must be exposed, so long as the British general [Cornwallis] continued to press him.

After Yorktown Wayne was dispatched to the far South and he so won the gratitude of Georgia for his liberation of the state, both from the British and from Native American depredations, that he was rewarded with the confiscated rice plantation of the loyalist Sir James Wright.

At the organization of the Society of the Cincinnati of Pennsylvania on 4 October 1783 Wayne was elected Vice President and served until 1785. He signed their “Parchment Roll” as well as the “Pay Order of 1784”. On 4 July 1789 Wayne transferred his membership to the Society of the Cincinnati in the State of Georgia, where on 5 July 1790 he was elected their President, and he served in that office until 1792 when he transferred his membership back to Pennsylvania.

During all of this time Wayne was struggling to bring his finances into order, and his dizzying career during several years bears witness to it. His ultimate failure was evidenced by the loss of the Georgia plantation. In 1787 he supported ratification of the Federal constitution as did most of his fellow-officers. He was elected a Representative from Georgia to the United States Congress, where he sat from March 1791 to March 1792, but his seat was declared vacant because of irregularities in the financing of his election and residence qualifications.

On 5 March 1792 Wayne was named Major General and Commander of the United States Army in succession to Arthur St. Clair, vanquished by the Northwest Native Americans at “St. Clair’s Defeat” on 4 November 1791. Wayne undertook the pacification of the Northwest with more caution than he often had demonstrated in his earlier career. Possibly the history of his relations with St. Clair helped vitalize Wayne’s campaign which ended in victory at Fallen Timbers on 20 August 1794. As events turned in 1794, Washington subdued domestic enemies in Western Pennsylvania; Wayne overcame the hostile Native Americans of the Northwest at Fallen Timbers, and finally, John Jay by treaty obtained a settlement of many difficulties remaining from 1783, chief among them the evacuation of the western frontier forts by the British.

The Treaty of Greenville was signed on 3 August 1795, and forever ended the British-Native American hegemony on the Old Northwest. On Monday 11 July 1796 Detroit was finally delivered to the United States, thirteen years after the Treaty of Paris had said it should be done. The occupation of the fort by sixty-five American soldiers commanded by Captain Moses Porter was uneventful, and on 13 August Wayne arrived to inspect the new post. Satisfied with the condition of the fortifications, the resident population, and the United States Army, Wayne left for a similar inspection of Presqu’Ile (Erie) about the middle of November. There, on 15 December 1796 he died following an attack of the gout and an acute intestinal disorder. As he had wished, he was buried at the foot of the flagstaff of the post.

In 1809 the General’s son Isaac Wayne travelled to Erie, retrieved his father’s remains, and brought them to St. David’s Church, Radnor, where they were reburied. On 4 July 1809 the Society of the Cincinnati of Pennsylvania voted the erection of a monument at the grave. This work was finally completed in 1811 when dedication ceremonies were held. In 1879 the site of Wayne’s original grave at Erie was marked by the Commonwealth. As early as 1798 Pennsylvania honored the General by naming a new county for him, and there are other Wayne Counties elsewhere. In addition, Pennsylvania, Georgia and Virginia each has a Waynesboro, North Carolina has a Waynesville, Indiana a Fort Wayne, and Nebraska a Wayne. Streets, avenues, townships and waterways with his name are too numerous to attempt listing.