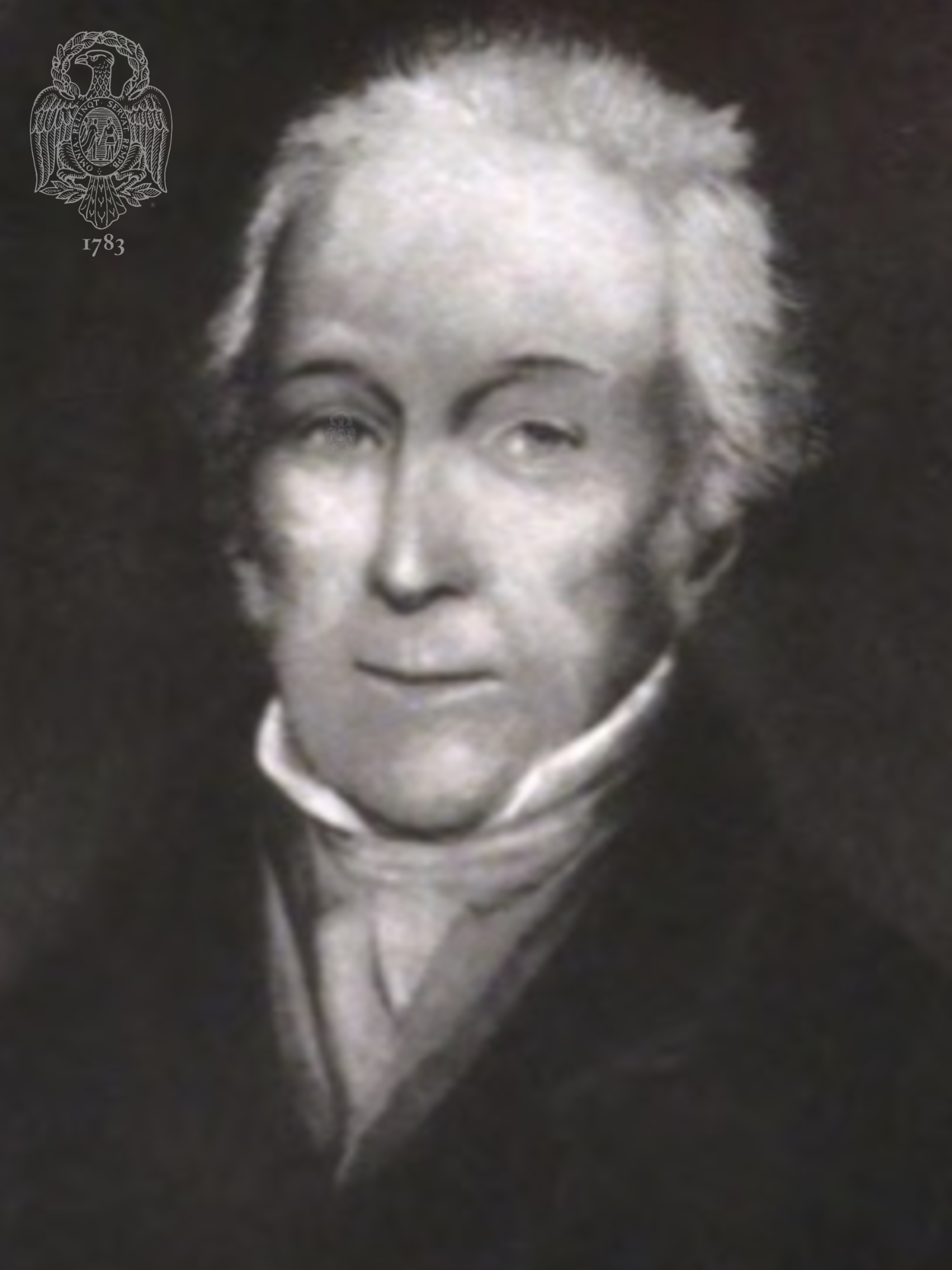 Claypoole was born in Philadelphia in 1756, the son of James Claypoole (1720-ca.1796) and his second wife Mary Chambers. Abraham’s grandfather, Joseph Claypoole, Sr. (1677-1744) was brought by his parents to Philadelphia in 1683 and Joseph became a cabinet-maker associated with other Philadelphia artisans of his time.

James Claypoole is sometimes said to have been the first Philadelphia portait painter and was working as such before 1750. He also was a merchant of artists’ supplies, and it was in his house that Benjamin West and Charles Willson Peale became acquainted with the works of other artists working in the city, but none of Claypoole’s work is known today.

James Claypoole was further identified with Philadelphia’s artists because of the marriage in 1729 of his sister Rebecca to Henry Pratt (1708-1749), Philadelphia goldsmith and jeweler. They became the parents of the painter Matthew Pratt (1734-1805), whose work has been extensively studied in this century, and Matthew Pratt learned the rudiments of painting from his apprenticeship, in 1749, to his uncle James Claypoole.

Again, James Claypoole’s daughter Mary (1753-1829) married in 1783 the painter James Peale (1749-1831), a brother of Charles Willson Peale, and an original member of the Society of the Cincinnati of Maryland. There were seven children, of whom only three married.

James Claypoole had also a public career of considerable interest as he was the war-time Sheriff of Philadelphia, a position of responsibility at a time of shifting allegiances and legal maneuvering in the nation’s largest city. He is supposed to have died in Bermuda about 1796, and therefore did not live to see the marriage of his daughter Elizabeth, widow of Norris Copper, to Timothy Matlack whose illustrous career as a Pennsylvania patriot is often submerged by his having been the engrosser of the signed copy of the Declaration of Independence. There were no children of this marriage.

David Chambers Claypoole (1757-1849), another of James’ children, had also his part to play in the country’s history. With certain lacunae he was the publisher of the Pennsylvania Packet, later to become the Pennsylvania Packet and Daily Advertiser, and Claypoole’s American Daily Advertiser, until 1800. His more important task, perhaps, was as the printer to Congress of their Journals and Debates, from 1783 to 1800.

With all these ramifications, it is not to be wondered at that Abraham George Claypoole, James’ third child and older son, entered the military in 1776 when, at the age of twenty, he was made an Ensign in a militia company. This service could not have lasted for very long, however, for on 1 February 1777 he was commissioned Captain-Lieutenant in Colonel John Patton’s “Additional” Continental Regiment, authorized by Congress in December 1776. He was promoted to Captain 10 June 1778, and continued in that rank for the duration of his military service.

Little information exists as to the regiment’s activities: it was present at Brandywine and Germantown, and wintered at Valley Forge in 1777-1778. At Monmouth in June 1778 the regiment was in Wayne’s command, and in October reinforced Hartley’s Regiment in the Susquehanna Valley, where, in December the two regiments were amalgamated to form the “New” Eleventh Pennsylvania Regiment. Hartley was named commander of the new regiment, but was shortly succeeded by Adam Hubley of Lancaster, Lieutenant Colonel Commandant. The regiment’s chief service occurred during the Sullivan Expedition of 1779, previously described. At the conclusion of that campaign the regiment returned to Washington’s direct command and was stationed at Morristown, where on 1 January 1781 the unruly actions of the men of the Eleventh led to the general revolt of the Line.

Mr. Claypoole married Elizabeth Popwell Thompson on 4 February 1789 at the Second Presbyterian Church of Philadelphia. There were three children of this marriage, including a son, James Thompson Claypoole. He married secondly, on 28 November 1795, Elizabeth, daughter of Lieutenant William Snow and Elizabeth (Long) Steele. Born about 1768, she died 4 November 1818, leaving four children of this marriage. Claypoole removed to Ohio sometime after 1808, and had been Cashier of the office of Discount and Deposit of the United States Bank at Chillicothe, Ohio, when he died on 11 February 1827.