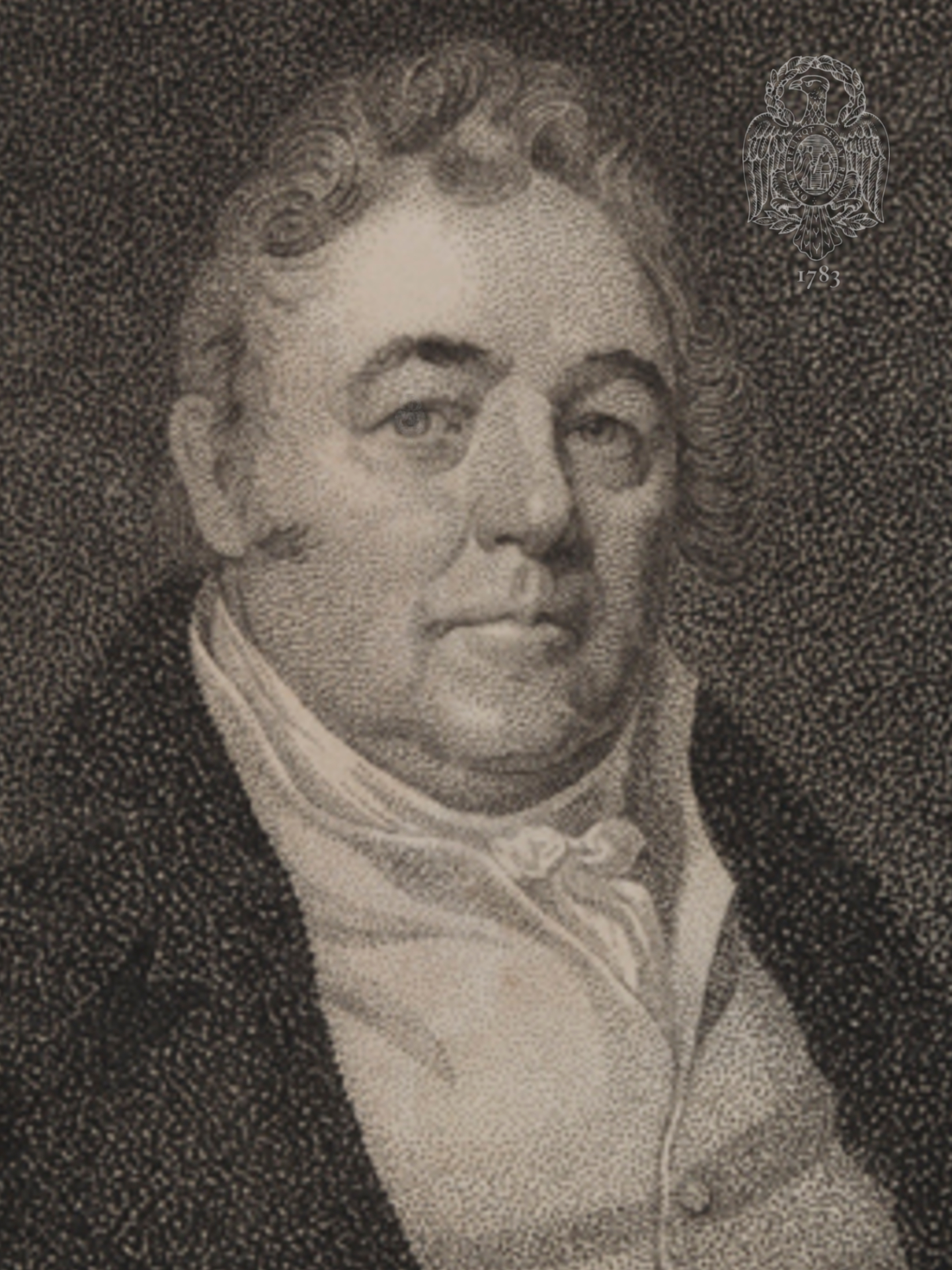 On motion of W[illiam] Jackson, seconded by T[homas] Robinson, Captain Richard Dale, an officer in the Navy during the Revolutionary War, and who had served therein the time prescribed by the Constitution of the Society, was admitted as a member in his own right, on paying his month’s pay, and subscribing the Articles [i.e.,the Institution].

Richard Dale was born in Portsmouth, Virginia, on 6 November 1756, the son of Winfield and Ann (Sutherland) Dale. His father was a shipwright so that it might be said that the sea was his natural heritage: in 1768, at the age of twelve, he made his first voyage to Liverpool aboard a ship owned by his uncle, and when he reached fourteen he was apprenticed to a Norfolk ship-owner and made several voyages to the West Indies.

By 1775 Dale was chief mate of a large brig, and the next year he was commissioned as Lieutenant of a light cruiser belonging to the Virginia Navy. His ship was captured by the British Liverpool and Dale underwent his first experience of imprisonment aboard a British prison ship. He was apparently so affected by the experience that he accepted service on a British ship’s tender, commanded by one of his acquaintances. Although wounded in his first engagement against the Americans he next sailed for Bermuda, but on the return voyage his vessel was captured by the American brig, the Lexington, Captain John Barry [an Original Member of the Society].

Whether through Barry’s persuasiveness or from some other cause, Dale decided his future lay with the Americans and he entered the Continental Navy as a midshipman aboard the Lexington. Barry’s successor aboard the brig was Captain William Hallock who promoted Dale to Master’s Mate, but the vessel was captured by the British Pearl, and Dale was again a prisoner, exchanged in January 1777, when he again joined the Lexington, Captain Henry Johnston. In March they sailed for Bordeaux where they were attached to Captain Lambert Wickes’ squadron, which successfully circumnavigated Ireland doing what damage they could.

On 18 September 1777 the Lexington again put to sea from France but the next day she was captured, taken unto Plymouth, England, and the officers and crew were confined to the Mill Prison, charged with High Treason. In February 1778 Dale and Johnston succeeded in escaping from the prison, were recaptured and confined to the “Black Hole” for forty days. Undaunted, Dale escaped again the next year and this time was able to make his way to France. At L’Orient he found John Paul Jones [an Original Member of the Society] fitting out the Bonhomme Richard and was made Master’s Mate of that ship, soon to be promoted to First Lieutenant by Jones. They sailed on 15 August 1779 for the famous cruise that culminated in the action off Flamborough Head against the Serapis. When the British ship struck her colors, Dale “received permission from Jones to take possession of the prize, and swinging himself off a part of the rigging of the Serapis, alighted alone on the quarter-deck of the capture and accepted the surrender of Captain Pearson. Not until after the action was ended did he discover that he had been severely wounded by a splinter in the ankle and foot.”

Dale continued with Jones, cruising on the Alliance in 1779 and 1780. On 18 February 1781 they arrived back in Philadelphia aboard the Ariel and were given the formal thanks of Congress on 14 April. Dale was now regularly put on the list of Continental Navy lieutenants, his former appointments having been made by the American agents abroad. In June he joined the Trumbull as First Lieutenant under Captain James Nicholson, but in August was again wounded and captured by the British. He was sent to New York for his fourth term of imprisonment but was paroled on Long Island and exchanged in November.

The war was approaching its end, the Continental Navy was in parlous condition, and there were no longer any effective state navies. Dale accepted a commission as First Officer, soon to be Captain, of the letter-of-marque vessel, the Queen of France. In the Spring of 1782 he sailed for France, made some captures, and beat off a British privateer. But this was his last sea service during the Revolution. He returned to Philadelphia in February 1783 and was discharged from the service.

Dale did not leave the sea, but instead became part-owner of a large merchant-ship for the East Indies trade. It was natural for him also to be interested in the Philadelphia-China Trade which began to develop as early as 1783 when Robert Morris purchased Dale’s old ship, the Alliance. John Barry [an Original Member of the Society] had been the last commander of this frigate, and by 1787 was Captain of the Asia, the first Philadelphia ship built for the China trade.

However Dale did not sail for China until years later. His roots became more firmly anchored in Philadelphia in September 1791 when he married Dorothy, the daughter of Jonathan and Mary (Keen) Crathorne, and he continued in his prosperous sea trade until 1794. Mrs. Dale was first cousin to Mrs. John Barry and to the wife of Patrick Hayes, Barry’s nephew and successor in the Society of the Cincinnati; these and other relationships made for a congenial and closely-knit family group, united also by its maritime interests.

In 1794 the United States created a new navy and Richard Dale was one of the six captains appointed in it by Washington. His first assignment was the supervision of the building of a new frigate at Norfolk. Things moved slowly, however, and in 1795 he obtained a furlough and turned to the China trade in earnest, making several voyages there in command of the Ganges, the Pigou, and the Canton.

In 1798 the Ganges was purchased by the United States and Dale made in her the first cruise undertaken by a vessel of the new Navy, but his first real command was a squadron which sailed from Hampton Roads in June 1801 with instructions to proceed to the Mediterranean to observe the actions of the Barbary pirates. If they were peaceful, the squadron was to cruise the Sea and then return to the United States. If the Barbary powers “have declared war…you will then distribute your force…so as best to protect our commerce and chastise their insolence – by sinking, burning or destroying their ships and vessels wherever you shall find them…” Nothing of great moment occurred and Dale returned to Norfolk on 14 April 1802. In December he retired from the navy as the result of a dispute over rank and lived thereafter as a private citizen of Philadelphia, enjoying considerable esteem.

In January 1803 Dale was elected a Director of the Insurance Company of North America, but in July was chosen for the Board of the Union Insurance Company of which he was a founder and President in 1824-25. In 1813 he was the first President of the Washington Benevolent Society of Pennsylvania, and as such dedicated Washington Hall in Philadelphia in October 1816. He was an active member of the Episcopal Church and served on the Standing Committee of the Diocese of Pennsylvania.

Richard Dale died at his residence on 24 February 1826; his widow survived until 4 September 1832 and both are buried in Christ Church Burying Ground, Philadelphia. They left issue, including John Montgomery Dale who succeeded his father as a member of the Society of the Cincinnati of Pennsylvania in 1827.