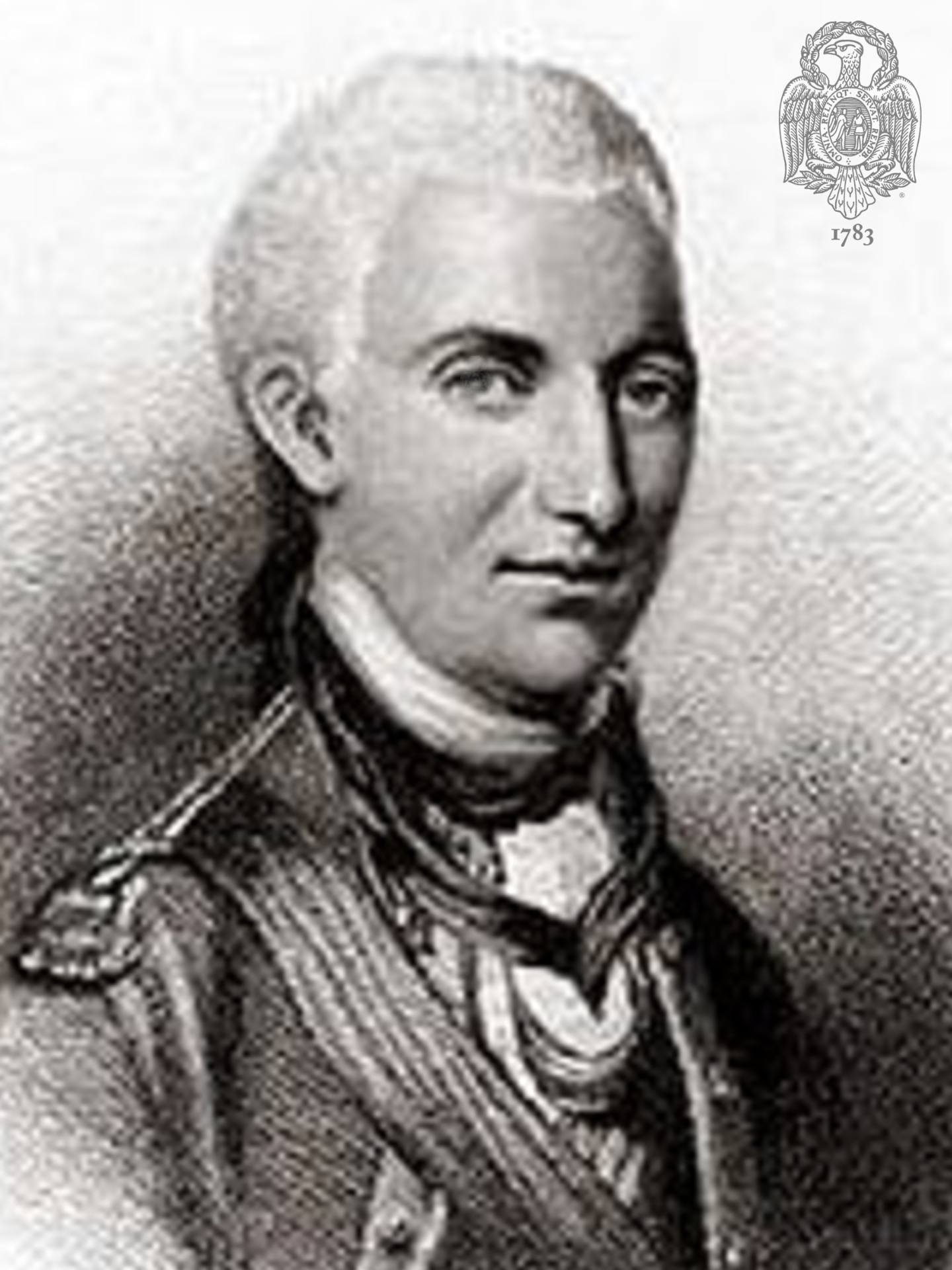 Colonel Febiger, the son of Jørgen Mathias Fibiger and Sophie Dorothea Pedersdatter Østrup, was born 19 October 1749 in Hillerslev, Denmark, where his father was church organist. He came to America as clerk to his uncle who was a planter and customs inspector on the island of St. Croix. The extensive trade between the West Indies and New England led him to come to the mainland in 1772. He settled in Boston where he was engaged in “the lumber, fish and horse trade” when the Revolution began.

The news of the Battle of Lexington caused him to cast his lot with the Americans, he was commissioned a lieutenant in the Massachusetts service on 28 April 1775, and in May became Adjutant of [Samuel] Gerrish’s Regiment, adopted into Continental service on 14 June. At the Battle of Bunker’s Hill on 17 June and in the subsequent retreat of the Americans to Cambridge he commanded a portion of his regiment.

During the Canadian Expedition of 1775 Febiger served as Brigade Major to Benedict Arnold. At the failure of the attack on Quebec on 31 December 1775 Febiger, like most of the command, was taken prisoner. His fellow prisoner, John Joseph Henry of Lancaster, later wrote of him as “a real and well instructed soldier, and an engineer.” Febiger was paroled 10 August 1776 and reached New York by sea on 11 September; he was exchanged in November and was made Lieutenant Colonel of the Eleventh Virginia Regiment, Colonel Daniel Morgan, on 13 November 1776.

As a Virginia officer Febiger commanded his regiment at Brandywine; Morgan had been detached to Gates’ northern army. On 26 September he was promoted to Colonel, and was on Greene’s right at Germantown. Five days later he took command of the Second Virginia Regiment, 9 October 1777. He wintered at Valley Forge, took the Oath of Allegiance to the United States on 11 May 1778, and fought at Monmouth. As part of Anthony Wayne’s Light Infantry Brigade, Febiger was elated by the success at Stony Point on 16 July 1779 and wrote his wife after the battle

My dear Girl, – I have just borrowed pen, ink, and paper, to inform you that yesterday we marched from Fort Montgomery, and at 12 o’clock last night we stormed this confounded place, and with about 14 killed and 40 or 50 wounded we carried it. I can give you no particulars as yet. A mosquoet ball scraped my nose, no other damage to old Denmark. God bless you. Farewell.

He claimed that he personally made Lt. Colonel Henry Johnson, the British commander at Stony Point, his prisoner. In his report to General Washington Wayne said he had placed himself at the head of Febiger’s Regiment on the right, and that “Colonels [Richard] Butler, [Return Jonathan] Meigs & Febiger conducted themselves with that coolness, bravery & perseverance that ever will ensure success.”

Febiger now was sent to Philadelphia as an “expediter” for supplying arms and supplies to the southwards, and in the Spring of 1781 returned to Virginia where he was engaged in raising troops; ten Virginia regiments had been captured at the fall of Charleston on 12 May 1780. Virginia raised a battalion of “eighteen-months men,” about four hundred and twenty-five strong, commanded at some times by Febiger, which was with Lafayette before the Siege of Yorktown. Most authorities agree that Febiger was at Yorktown but the Order of Battle shows that this Virginia Battalion was, perhaps nominally, commanded by Lt. Colonel Thomas Gaskins.

After Yorktown Febiger was on garrison duty at Cumberland Old Court, Virginia, until 2 May 1782 and he continued in the service as Colonel of the Second Virginia Regiment until his retirement on 1 January 1783 at the reduction of the army. On 30 September 1783 he received the brevet rank of Brigadier General. On this occasion he wrote to James O’Hara of Pittsburgh, who had married his wife’s sister,

Congress were pleased to confer on me the rank of Brigadier-General, however this title I have never, nor don’t wish to make use of, as that of Colonel in this country is familiar and agrees much better with a merchant.

Febiger’s membership in the Society of the Cincinnati was somewhat complicated. He apparently was originally a member of the Virginia Society, but his name does not appear on the now badly-damaged Virginia Parchment Roll in the Manuscripts Division of the Library of Congress. However, in 1786 he certainly paid into the Virginia Society’s treasury his one-month’s salary. But on 24 April 1786 Febiger was elected a member of the First Troop Philadelphia City Cavalry, so he was certainly a resident of the city by that date. He does not appear in the records of the Society of the Cincinnati of Pennsylvania until 4 July 1788, when “…the Pennsylvania Society of Cincinnati met at the State House….The President & Vice President absent. The Society proceeded to the appointment of a Chai[r]man, When Christian Febiger, was unanimously elected,…”. At the same meeting Febiger was elected a member of the Standing Committee of the Society, and continued to be elected until 1791.

Febiger was appointed Auctioneer for the Northern Liberties of Philadelphia by the Supreme Executive Council of Pennsylvania on 19 August 1786 and was reappointed in November 1787. He resigned the post in March 1789, stating that there was too little business to share the job with William Shannon. But on 11 November 1789, in spite of prevailing party differences, the General Assembly of the Commonwealth unanimously appointed Febiger State Treasurer, a post he held for the rest of his life.

In addition to these honors, the Colonel was commissioned as “Captain of the First Troop of Light Horse in the Militia of the City and Liberties of Philadelphia,” on 4 May 1790. He resigned this commission and his membership in the First Troop on 5 April 1794, but was retained on the Honorary Roll. He was also an original subscriber to the first Chestnut Street Theater and the Dancing Assembly of the City.

In the census of 1790 Col. Christian Febiger is shown in the “Northern District. Between Vine and Race Streets, and from the River Delaware to the Schuylkill”. Besides himself there were in his household one other male, under sixteen, and four fe-males. He had married on 14 August 1777, in the Second Presbyterian Church of Philadelphia, Elizabeth, daughter of William Carson, who kept the “Harp and Crown” in Third Street. There were no children. Colonel Febiger died in his home in Market Street, north side, west of Seventh, on 20 September 1796 and was buried in the Second Presbyterian Churchyard, Arch Street, but his body was later removed to the Mount Vernon Cemetery. He had adopted his wife’s nephew Christian Febiger Carson who changed his name to Christian Carson Febiger in accordance with the provision in the colonel’s will.