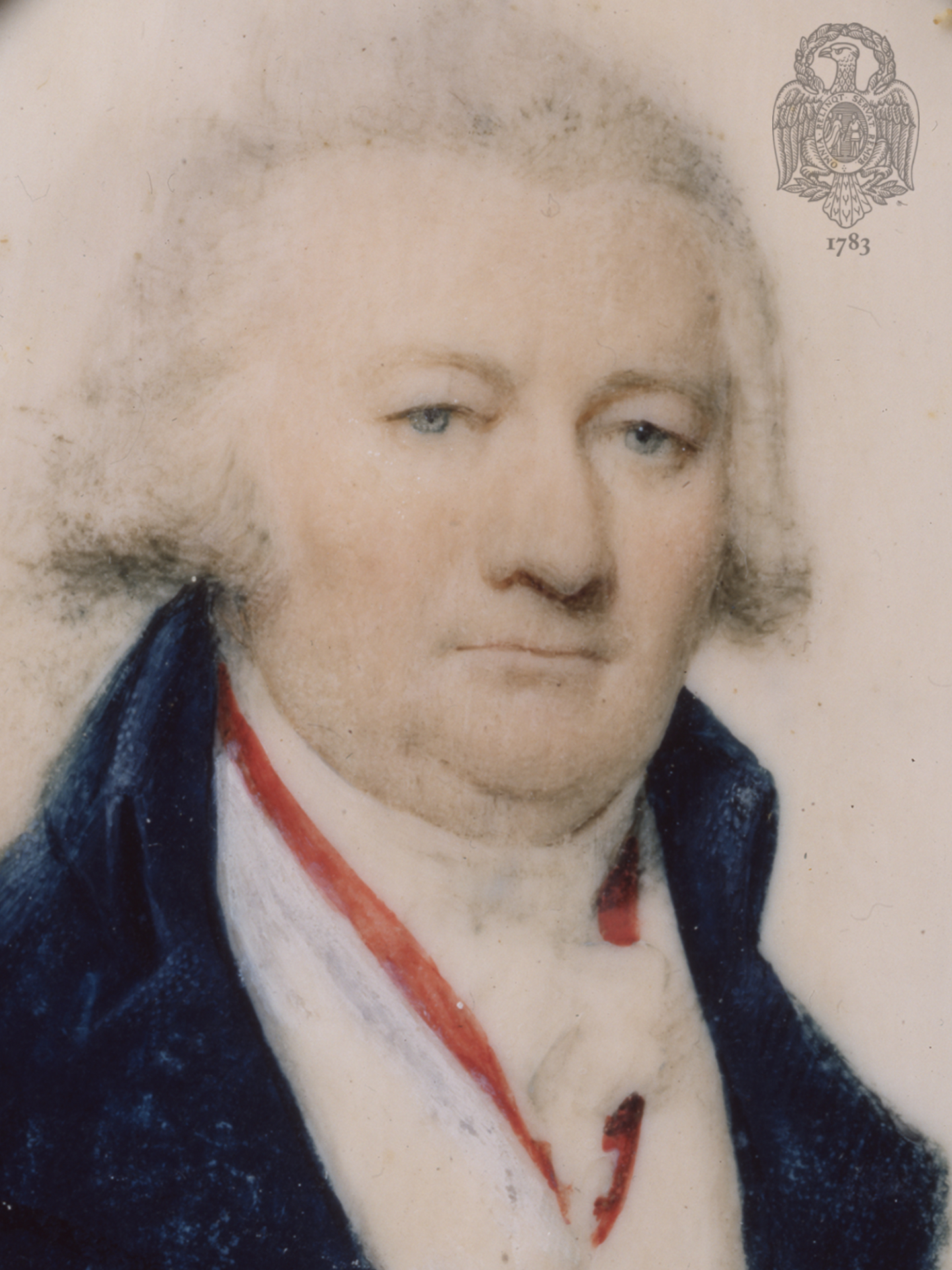 Thomas, the son of George Hartley, was born in Colebrookdale Township, Berks County, on 7 September 1748. He is said to have been given a “classical education” at Reading, but at the age of eighteen was sent to York to study law with Samuel Johnston, for years the only lawyer in the town, and said to have been a relative of Hartley’s mother. In 1769 at the age of twenty-one Hartley was admitted to the Bar of York County. He was popular and had a prosperous practice because of his bilingualism in English and German. His mentor, Samuel Johnston, had become Prothonotary of the county in 1764 and from 1769 until 1776, when he became Colonel of the Sixth Pennsylvania Battalion, Hartley and James Smith, Signer of the Declaration of Independence, were the only attorneys in York County.

It is small wonder then, that during the agitation preceding the outbreak of hostilities, Hartley occupied a prominent position among the York County revolutionists. He was elected in 1774 to the Provincial Convention of 1775, called to elect and instruct delegates to the Continental Congress. In 1774 he was chosen one of the Committee of Correspondence for the county, and in 1774 and 1775 he was Vice President of the York County Committee of Observation. In December 1774 he was selected as lieutenant of a company of Associators, of which James Smith was captain, but in July 1775 Hartley was elected Lt. Colonel of York County Associators, James Smith, Colonel.

When the Continental Army came into existence in 1776 Hartley was commissioned on 10 January Lt. Colonel of the Sixth Pennsylvania Battalion, authorized on 4 January, of which William Irvine was Colonel. The battalion marched to Canada, and when Irvine was captured at Three Rivers on 9 June 1776 command devolved on Hartley. In the general retreat from Canada the Sixth Battalion fell back to Ticonderoga and there the one-year enlistments of its men ran out; the battalion was mustered out at Carlisle on 15 March 1777.

Many of the personnel of the battalion re-enlisted in its successor, the Seventh Pennsylvania Regiment, but Hartley’s performance in Canada was such that he was promised command of a new regiment. It was authorized 11 January 1777 and known as “Hartley’s Additional Regiment”. The regiment first saw action was at Brandywine and it played a creditable role at Paoli, where it formed a rear guard strong enough to hold off the British. At Germantown the regiment formed part of Wayne’s Division, and it endured the Valley Forge Winter of 1777-1778 until moved to York to act as protection for the Continental Congress, then sitting there.

But Hartley’s most notable achievement was in frontier protection after the Wyoming “massacre” of 4 July 1778. His regiment was already on the Susquehanna and thus the closest to the area at risk after the British-Indian raid. Hartley was ordered forward to Sunbury, and supplementing his small force with militia, he carried the American offensive as far as Tioga (Athens) and Wyalusing; it was the first organized offensive on the Pennsylvania frontier. The regiment returned to Sunbury about 5 October, but the British returned to the Valley almost immediately and in November Hartley found it necessary to fortify and garrison strong points as far afield as Wyoming. Reinforcements arrived in December, and consisted of another depleted regiment, “Patton’s Additional Regiment”. Congress ordered the two regiments combined and they became the “New” Eleventh Regiment. Hartley was appointed commander of the new regiment but resigned the command on 13 February 1779. He was replaced by Adam Hubley, who was to lead the regiment again into central Pennsylvania during Sullivan’s Campaign.

Hartley had been elected to the General Assembly in 1778 and he took his seat the next year. Probably this partly explains his resigning his commission, but it is likely that his health had suffered during his campaign. He did not return to the Assembly after this term, but played a part in state and national politics in other roles.

When the Society of the Cincinnati of Pennsylvania was founded in 1783 Thomas Hartley signed the Parchment Roll:

Thos Hartley Colonel of one of the 16 additional Regts and of the 11th Pennsyl-vania Regt entered the Service the 10th of January 1776 and resigned the 12th of February 1779 with Leave of Congress.

His name appears in the “Report of Sub-Committee June 20th 1789” on the “List of Officers that signed but did not pay”. It is not on the “Delinquent List” dated four days later, so that the matter was apparently adjusted.

The year 1783 was also a cardinal one in the constitutional history of Pennsylvania, for it was then that the first “Council of Censors” convened. Their duty was to review the history of the Constitution of 1776 and recommend its continuance, amendment or replacement. Hartley was elected a member of the Council and found himself in the congenial company of the conservative “Republicans” Frederick A. Muhlenberg, Arthur St. Clair, Anthony Wayne, James Moore, Stephen Chambers, William Irvine [ Original Members of the Society], and Samuel Miles.. There was general agreement that changes should be made, but this issue was not to be settled until a new constitution evolved in 1790. Hartley identified with the conservative, “Republican”, “Anti-constitutionalist”, later “Federalist” interests; that is to say his political sentiments were those shared by a majority of the Pennsylvania officers.

In 1787 Hartley was a member of the Pennsylvania convention for ratifying the Constitution of the United States. In 1789 he was elected a Representative to the First Federal Congress and served through the Sixth Congress of 1800. William Maclay of Northumberland County, a colleague, mentions Hartley in his famous diary, often not very complimentarily but it is evident that Hartley enjoyed the esteem of his peers. His Federalist proclivities are evident in his voting record. In the debate on the location of the permanent seat of government he advocated York in the first instance, and then some location on the Susquehanna River; although the battle was hard-fought it was, obviously, lost.

In the census of 1790 Thomas Hartley was a resident of York Borough with one other male over sixteen years of age, two females, five other free persons, and five slaves. In 1799 he was the first Pennsylvanian to be admitted to plead before the Supreme Court of the United States. On 28 April 1800 he was commissioned by Governor Thomas McKean Major General of the Fifth Division, Pennsylvania Militia. Hartley resigned his seat in Congress on 8 September 1800 and died at York on 21 December; he was buried in the churchyard of St. John’s Episcopal Church there. Hartley’s present-day memorial is Hartley Township (1811), and the borough of Hartleton (1799), Union County, both named for him. They indicate his ownership of lands which in his lifetime were in Northumberland County.

Thomas Hartley was a Mason. On 5 July 1787 he married Catherine, daughter of Bernhard and Elizabeth Holtzinger, early residents of York. Legal instruments term Bernard Holtzinger, “blacksmith”; he died in Baltimore County, Maryland, before August 1773 Catherine was born 24 May 1750, died on 2 October 1798 and is buried at St. John’s. There were two surviving children, Charles William Hartley, Prothonotary of York County 1800-1806, and Eleanor, wife of Dr. James Hall of Philadelphia.