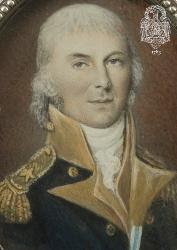 Alexander Murray, born 12 July 1755, was one of eight children of Dr. William and Anne (Smith) Murray of Chestertown, Kent County, Maryland. The family had emigrated to the Mainland from Barbadoes; traditionally they had left Scotland because of loyalty to the House of Stuart. The family connections in America were significant: Alexander’s brother Dr. James Murray (1741-1820) often rather misleadingly called “of Annapolis” married Sarah Ennals Maynadier (1751-1857), whose extended family in Maryland was very influential. James’ children, Lieutenant Murray’s nieces, included Sarah, wife of Edward Lloyd (179-1834), Governor of Maryland 1809-1811; Anna Maria, wife of General John Mason of Analostan, and the mother of Senator James Murray Mason (1798-1871) of Mason-Slidell fame ; and Sarah, wife of the Hon. Richard Rush (1780-1809) of Philadelphia, Attorney General, Secretary of the Treasury, and Secretary of State of the United States, Minister to the Court of St. James and Minister to France. Katherine Banning (1770-1855), a first cousin once removed to Lieutenant Alexander Murray, married Benjamin Chew of Philadelphia (1758-1844). One of their thirteen children, Eliza Margaretta (1798-1874), married Senator James Murray Mason, supra.

Bred to the sea, Alexander Murray was in command of a merchant vessel in the European trade by the age of nineteen, but on 2 January 1776 Murray was elected Second Lieutenant of Captain Nathaniel Ramsey’s Fifth Company, Smallwood’s Maryland Regiment. These were State Troops made available to Congress and were ordered to join the Main Army at New York on 17 July; they were adopted by Congress on 17 August, and Murray was promoted to First Lieutenant about the same time. The regiment, in Lord Stirling’s Brigade, was engaged at Long Island, Harlem Heights, White Plains and Fort Washington. At Long Island, acting as rear guard during the American retreat, Smallwood’s regiment lost some 259 men. Their action, sometimes characterized as “having saved Washington’s army”, is commemorated by a monument in Prospect Park, Brooklyn. On 15 September the artillery battery in New York was brought into play against British ships attempting to sail up the Hudson River. A terrific explosion in the battery so injured Murray, and particularly his hearing, that he never entirely recovered from it and at the end of his life was completely deaf, but on 10 December 1776 Murray was again promoted, to Captain. The enlistments of this regiment ran out at the end of the year.

In January 1777 Smallwood’s Regiment was reorganized as the First Maryland Regiment, the remains of the old organization forming its cadre. But the losses suffered by the Marylanders dictated that they play but a small part for the first six months of the regiment’s existence. The remnant was engaged at Princeton on 3 January, brigaded with Colonel Samuel Miles’ Pennsylvania Rifle Regiment. Soon after this Washington’s plan for the army’s reorganization occupied all hands. Murray remained with the First Maryland Regiment, Colonel John Hoskins Stone. The regiment was not involved in any major actions during the first part of the year, and on 10 June 1777 Murray resigned his commission.

Murray, now twenty-two years old, applied for a commission in the Continental Navy but while awaiting the outcome of that he was commissioned, in succession: on 10 June 1777, Captain of the Maryland privateer sloop General Mercer, ten guns, William Lux of Baltimore, owner; on 1 May 1778, the brig Saratoga, twenty guns, Samuel and Robert Purviance of Baltimore, owners; on 5 April 1779, the brig Columbus, sixteen guns, owned by the Purviances; and on 24 June 1780, the brig Revenge, W. Knox and the firm of Young and Purviance, owners. Also, on 16 August 1779 Murray was the owner of the sloop Bennington, ten guns, Robert Craige, Captain. Little is known of his privateering adventures and he lost both the Saratoga and the Revenge, but that he was able to purchase his own sloop in 1779 shows that profits had accrued.

Murray was twice a prisoner of the British. When the brig Revenge was captured off Nantes, France, by a British privateer on 30 August 1780, the Americans were interned at Penzance, but Murray was back in Maryland early in 1781. He again applied for a Continental commission on 13 June, and his letter to Congress gives a summary of his history to that date:

The Memorial & petition of Alexander Murray Sheweth that he was regularly brought up to the Sea from his early youth under experienced seamen, & by their attention & his own Ambition, obtained the command of a vessel in the Eastern Trade, at nineteen years of Age. The present war soon after breaking out & being Zealous in his country’s cause, he obtained a Lieutenancy in the first Maryland Regiment & serv’d the active campaign of 1776 when he obtained a Company in the said Regiment. But being ever attach’d to the sea service & having a prospect of being employ’d in the Sphere of life he had originally been engaged in, which might be equally beneficial to his Country & more agreeable to his inclination, he left the Army & repaired to Phila after the Retreat through the Jerseys & made application to Mr Hancock for a birth [sic] in the Navy one of the thirteen Continental frigates, he promised him his Interest, & assured him as did several others, members of Congress, that he might depend upon having his rank fixed as a Lieutenant in the Navy. But as our affairs at that Juncture were in unfavorable aspect, he return’d again to the Army, & served the remainder of the Campaign, after which he went to Annapolis & took up the Command of a Private Sloop of War, & has ever since been active in the Cause, & captured several British merchantmen, & Privateers, & missed no opportunity of annoying the Trade of the enemy. Under these circumstances he hopes that the Honble Congress will allow him to serve as a Lieutenant on board of the Trumbull, under the Command of James Nicholson, Esq. the pay is no object with him nor does he expect any present Emolument from such an appointment, but looks forward to a time when the Navy of the United States may be in a more respectable [?] footing, than it is at present,…

His petition was referred to the Board of Admiralty, and on 20 July Murray finally was commissioned Lieutenant on the American frigate Trumbull, Captain James Nicholson [an Original Member of the Society]; a fellow officer was Richard Dale [an Original Member of the Society]. The Trumbull sailed from Philadelphia with a flotilla on 8 August, bound for Havana. Off the Delaware capes she was captured by the British frigate Iris and towed to New York where the officers were imprisoned, but were exchanged sufficiently swiftly for Murray to be given on 6 November the privateering brig Prosperity, fourteen guns, Hugh Young and Company of Baltimore, owners. Murray sailed for St. Croix with a cargo of tobacco but encountered a fierce battle with a British privateer and only with difficulty was able to make St. Thomas. Refitting was slow and the Prosperity was not fit to sail before early 1782. On the way home Murray captured a British packet-ship in the Straits of Florida. He took her to Havana where he found Governor Cagigal preparing his expedition, ultimately, but temporarily, successful against Nassau. The story of this adventure has previously been given, supra. The Prosperity returned to Baltimore shortly thereafter, and nothing further is known of Murray’s activities for the remainder of the war, which ended with the preliminary peace treaty in April 1783.

By that time only one frigate remained to the Continental navy, the Alliance, Captain John Barry [an Original Member of the Society]. Ordered to load the warship with tobacco in Virginia and sail to Holland, Barry recruited Murray in Philadelphia as his First Lieutenant. The Alliance sailed from the Rappahannock River on 21 August but by the twenty-fourth was found to be leaking so badly that Barry sailed as fast as he could for Philadelphia. There the cargo was unloaded and the Alliance, one of the most renowned ships of the Continental Navy, was sold in 1785. That was the end of the Continental Navy, but Murray had resigned his commission in October 1784. Alexander Murray signed the “Parchment Roll” of the Society of the Cincinnati of Pennsylvania, but he was shown as delinquent in paying his subscription, and, indeed, apparently never did pay it. Nevertheless, he served as a member of Pennsylvania’s Standing Committee from 1810 to 1818. Murray established a mercantile business in Philadelphia for which his experience on the high seas and abroad highly qualified him, and he appears to have become prosperous. In the census of 1790 Murray is found a resident of the Northern Liberties, his household consisting simply of himself and two females.

In 1794 the nation found itself confronted with unexpected hostility and arrogance from its old ally France, then under the Directorate. A new American navy was established, commanded by Murray’s former superior John Barry, and Murray, volunteering his services, was given a Captain’s rank from 1 July 1798 and command of the Montezuma, patrolling in the West Indies. The posting was short-lived for Murray contracted yellow fever and had to give up his command the next year. On his recovery he was given Insurgente, with a patrol ranging from the Azores to Havana. Aboard at that time was Lieutenant William Miller, son of Colonel Henry Miller [an Original Member of the Society]; the young man died aboard ship. In 1800 Murray commanded the famous frigate Constella-tion, cruising in the Caribbean.

In 1800 the United States signed a treaty with France bringing an end to hostilities and allowing the attention of the country to be shifted to the piracy practiced by the Barbary States of Africa. In 1802 Murray was again in command of Constellation in the Mediterranean Squadron, Commodore Richard Valentine Morris, engaged in a rather ineffective blockade of Tripoli. Morris, Murray and the Mediterranean Squadron soon found themselves in conflict with the American State Department whose representative William Eaton preferred a diplomatic rather than a naval approach to solving the Barbary problem. Murray, about forty-seven years old, was then extremely deaf from the battery explosion of 1776, and Eaton found it excusable to complain to Secretary of State James Madison, saying the country “might as well send out Quaker meeting houses to float about the sea, as frigates with Murray in command.” Murray’s last sea command was Adams which patrolled the Carolina coast in 1805, protecting American commerce. By then he was totally deaf, but he remained in the service and during the War of 1812 was commanding officer at the Philadelphia Navy Yard. He retained this position until his death on 6 October 1821.

Alexander Murray was married to Mary, daughter of Magnus Miller, on 18 June 1782. There were eleven children, of whom the eldest surviving was Magnus M. Murray; another, Alexander M. Murray, died as a Midshipman in the United States Navy in 1822; a grandson, Alexander Murray, rose to the rank of Rear Admiral in 1876.