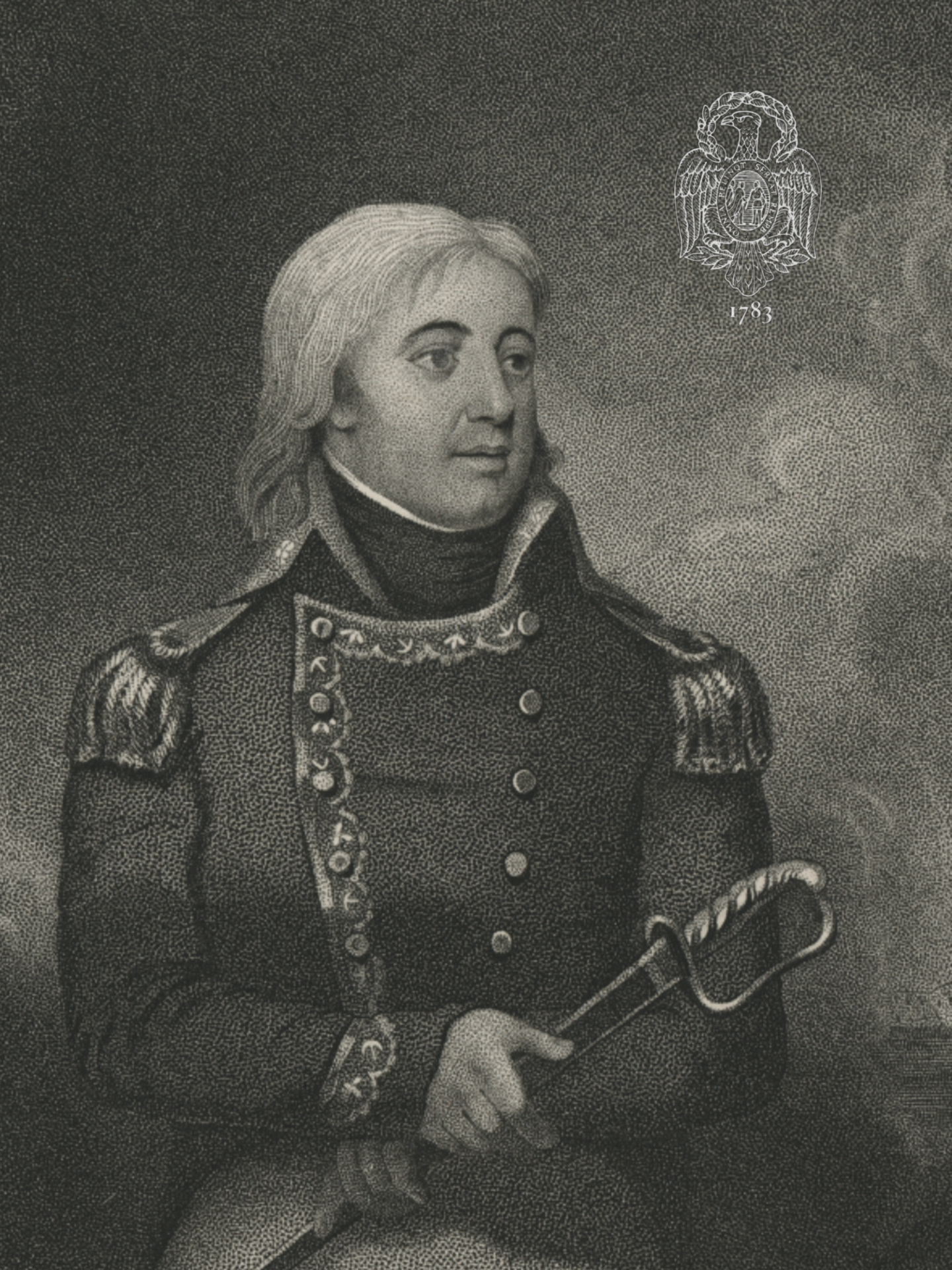 Barney, a true American hero of two wars, has been extensively treated in histories and biographies.

Barney was born in Baltimore 6 July 1759 the seventh child of the large family of fourteen of William and Frances (Holland) Barney. His formal schooling ended when he was ten years old and he was put to sea by his father.

In January 1775, while on a voyage to Nice with a cargo of wheat, the captain died, and there being no mate, Joshua Barney, at the age of fifteen took command of the vessel… and took her safely into Gibraltar. Here he negotiated the loan of a large sum for repairs and proceeded to Nice where he sold his cargo to advantage. He travelled across “the mountains” to appeal personally to the British minister at Milan who interfered successfully in Barney’s behalf. On the way back he took advantage of the opportunity to earn money for his employer by chartering his ship as a transport to the Spanish army, and was a witness to its defeat at Algiers, afterwards conveying some of the wounded back to Alicante. Then, recrossing the Atlantic in October, he appeared before his astonished employer, who with difficulty believed his story.

Barney was commissioned Lieutenant in the fledgling Continental Navy in June 1776. He served on the U.S. ships Wasp and Sachem, was captured and later exchanged. In December 1777 he was Lieutenant of the Virginia, and in April 1778 was again captured and exchanged. He became First Lieutenant on the Saratoga in 1780, was captured, taken to England, escaped to France, and in December 1781 returned to the United States.

In March 1782 Barney was given command of the Hyder-Ali, a ship of the Pennsylvania Navy. At that time Barney was described as “aged 25 years, Stature five feet eight inches, black hair and dark complection.” In this command while acting on convoy duty he captured the powerful British ship General Monk, of 21 guns, twice as powerful as Barney’s own. Already a hero because of his adventurous career, Barney was honored by the Commonwealth of Pennsylvania with the presentation of a sword of honor. Barney was now 23 years old. He retained his commission until May 1784, the last officer of the Continental Navy.

Barney then engaged in a series of commercial enterprises, while remaining more or less in the public eye. He farmed and explored in the south and in Kentucky. In 1787 and 1788 he took the active and influential part of a Federalist in the debates on and adoption of the Federal Constitution. In 1794, as commander of the merchant ship Cincinnatus out of Baltimore, Barney took James Monroe to France as the new American minister. In 1796 he accepted a commission as Captain and Chef de Division (Commodore) in the French revolutionary navy, and served with honor until 1802 when he was discharged with a pension that finally placed him in a better financial position.

Barney returned to America, and twice ran as a Republican for Congress but was defeated both times. Jefferson offered him the superintendency of the new Washington Navy Yard but Barney refused, and in the period leading up to the War of 1812 he went out as a privateer for two years.

In July 1814 when the British threat to Baltimore and Washington was about to overwhelm the American forces, Barney was called to Washington to advise concerning the defenses of those cities. He was placed in command of a flotilla of barges with heavy guns, a few gallies and several schooners manned by sailors and marines, and for some time was able to hold off the British advancing on Washington. With about five hundred men under his command Barney met the British at Bladensburg, Maryland, where he held the center of the American line until the militia on right and left gave way and the center collapsed. Barney was wounded in the battle and carried the bullet in his body until his death. Although again made prisoner by the British he was soon released. “This heroic resistence of the force under Barney alone saved the combat at Bladensburg from being an unqualified disgrace to American arms. He was presented by the city of Washington with a sword of honor.” James Fenimore Cooper wrote, “Captain Barney is said to have engaged in twenty-six combats, all of which were against the British, and in nearly all of which he was successful.”

In March 1780, just before he was ordered to the Saratoga, Barney married Anne, daughter of Alderman Gunning Bedford and his wife Susanna Jacquett, of Philadelphia. Another daughter of Gunning Bedford, Martha, married Captain-Lieutenant John Stricker [an Original Member of the Society] of the Fourth Continental Artillery. Barney’s first son was born during his imprisonment in England and it was not until his return to America in March 1782 that he saw him for the first time. His first wife died in Baltimore 25 July 1808, and he married, secondly, on 24 April 1809 Harriet Coale.

Barney signed the “Parchment Roll” of the Society of the Cincinnati of Pennsylvania, but on his removal to Maryland in 1807 his membership was transferred there. Barney in his elder years hoped to provide for his large family by removing to lands he had acquired in Kentucky. In preparation for this venture he moved his family to Pittsburgh, but died there on 1 December 1818 and was buried in the First Presbyterian Churchyard. In May 1848 his remains were removed to “Mount Barney” in the Allegheny Cemetery, Pittsburgh.