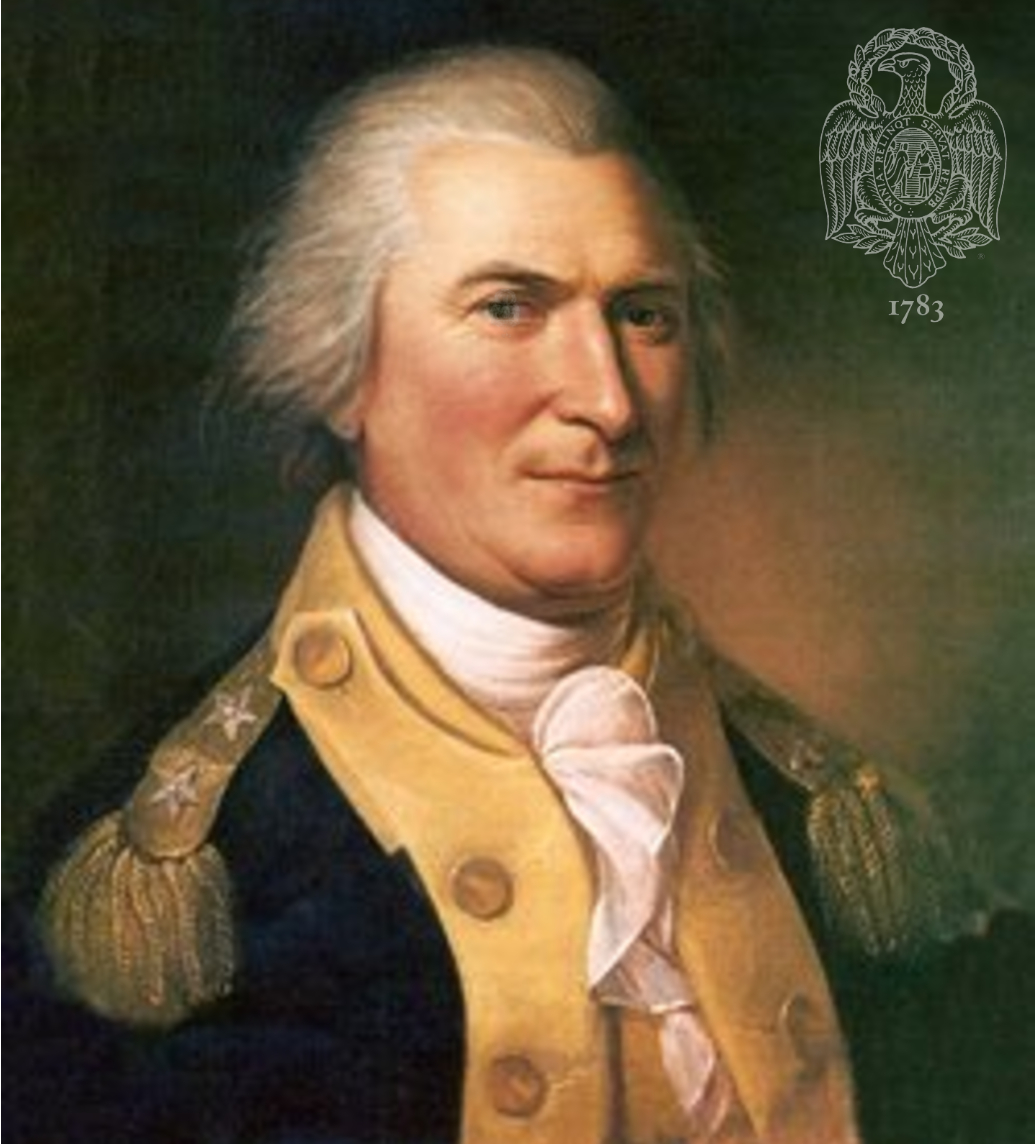 The parentage of General St. Clair has been uncertain for a very long time; he was probably a son of William and Elizabeth (Balfour) Sinclair of Thurso, Caithness, Scotland, where he was born 23 March 1736, Old Style. He received a good education, attended the University of Edinburgh, and studied medicine under Dr. William Hunter without qualifying. It is said that he inherited an income from his merchant father; in 1757 he became an Ensign in the Sixtieth Regiment of Foot, served under Major General Jeffery Amherst at Louisburg, 26 July 1758, under Major General James Wolfe at Quebec, 30 September 1758, and on 17 April 1759 was promoted to Lieutenant. On 15 May 1760 at Trinity Church, Boston, St. Clair married Phoebe, the daughter of Balthazer and Mary (Bowdoin) Bayard and the niece of James Bowdoin (1726-1790) who played a major part in Massachusetts politics during the Revolutionary period. It is claimed that the marriage brought St. Clair the large dowry of £14,000 “through inheritance”; at any rate, he sold his commission in April 1762.

With the legacy and his own military claims, St. Clair was a wealthy man, and he now bought some four thousand acres in the Ligonier Valley of western Pennsylvania. A frequent associate of St. Clair’s during these times was Richard Butler [an Original Member of the Society]. In 1771 Governor John Penn made him the representative of the Proprietary government in the west, and when Westmoreland County was erected in 1773 St. Clair was a Justice of the County Court. The claims of Virginia to southwestern Pennsylvania naturally brought St. Clair into conflict with Virginia’s agents, particularly the notorious Dr. John Connolly who seized Fort Pitt, renamed it Fort Dunmore, and garrisoned it for Virginia in January 1774. The Earl of Dunmore made good use of the fort during his campaign against the Native Americans in 1774, but in July 1775 Connolly decamped, and the first battles in the East enforced a de facto truce in the boundary controversy during the war.

St. Clair was made a member of the Westmoreland County Committee of Safety, and in 1775 came out of military retirement as a Colonel of the Pennsylvania Militia; on 3 January 1776 he was made Colonel of the Second Pennsylvania Battalion. The Battalion was committed immediately to the Canadian Campaign and arrived there by May. At Trois Rivières in June, General William Thompson’s capture put St. Clair in charge. He had, however, injured his foot and Anthony Wayne assumed command, thus laying the foundation for the feud that pursued these men for the rest of the war. The Americans’ retreat ended at Ticonderoga on 10 July, and there St. Clair was given command of the Fourth Brigade and was promoted to Brigadier General on 9 August 1776. Recalled to Headquarters, St. Clair made the campaigns of Trenton and Princeton during the winter of 1776-1777. In the Spring of 1777 St. Clair was again promoted, to became the only Pennsylvanian to rank as Major General during the war. On 12 May 1778 he had the honor of taking the Oath of Allegiance to the United States with General Washington and the other top officers of the Continental Army. He was sent back to Fort Ticonderoga, where, in spite of his able defence against Burgoyne’s attack, he was forced to abandon the fort in July 1777. A tremendous outcry in Congress demanded a court martial in September 1778, which acquitted the General with the highest honor. But “he was not, for the rest of the war, placed in a position to render conspicuous service.” After Arnold’s treason, St. Clair commanded West Point, and he was present at Yorktown but held no command there. He led the Pennsylvanians to Charleston, accepting the surrender of British garrrisons on the way, while Wayne was dispatched to Georgia. Douglas Southall Freeman expressed Washington’s opinion of St. Clair and his abilities by saying, “His record was clean; the minds of some of his critics were not.”

St. Clair was afflicted with gout and in February 1782 spoke of it to Washington, saying also that his personal affairs were out of order and that he hoped to return to Pennsylvania soon. He did return in the summer, to find his finances in a condition from which they never recovered. St. Clair did not abandon public life, and was elected a member of the Pennsylvania Council of Censors from Philadelphia County. In the first sessions that year the Council and the Assembly were controlled by the Republicans (Anti-Constitutionalists, conservatives). For St. Clair the practical result was his patronage appointment to the lucrative post of Auctioneer of Philadelphia.

St. Clair signed the “Parchment Roll” of the Society of the Cincinnati of Pennsylvania and was elected their first President in October 1783, when the Miniutes say,

The Society deeming it necessary to have another meeting as early as possible, directed Lieutenant-Colonel [Thomas] Robinson to give the Vice-President [Anthony Wayne] notice thereof (the President being at too great a distance to be notified).

Although St. Clair had established a residence at Pottstown during the war he appears at that time to have been looking after his affairs in Ligonier. He remained President until 1789, but his engagement in public office dictated that he participate little in the Society’s affairs.

General St. Clair served in the Continental Congress from 2 November 1785 until 28 November 1787, and was president of Congress in 1787. In that year the Northwest Territory was created, and St. Clair was appointed its Governor, serving until 1802. He made his headquarters at “Losantiville” on the Ohio River and renamed the settlement “Cincinnati” in honor of the Society of which he was a member. The story of his administration of military and civil affairs is far beyond the scope of this study and can be found in all histories of the period. Historical circumstances dictated that the accomplishments of these fifteen years of his life be overshadowed by the military disaster to American arms which has come down as “St. Clair’s Defeat”. To deal with the dangerous and deteriorating American-Indian relations in the Northwest, St. Clair was re-commissioned Major General, and Commander of the United States Army on 4 March 1791. At the Miami River in Ohio St. Clair’s army suffered fifty per-cent casualties on 4 November 1791. The public outrage that followed caused St. Clair to resign his commission on 5 March 1792. A Congressional investigation again cleared St. Clair of responsibility, and modern historians tend to concur. It remained for Anthony Wayne to end finally the Indian Wars in the Northwest at the Battle of Fallen Timbers on 20 August 1794. In spite of the military failure St. Clair remained as Governor of the Territory until he was removed by President Jefferson in 1802 for opposing statehood for Ohio.

St. Clair returned to his home, “The Hermitage”, at Ligonier. All efforts to improve his finances failed and his old age was spent in poverty. In 1803 he built Hermitage Furnace and is considered one of the founders of the Pittsburgh iron industry, although he profited little from it. In 1810 James O’Hara of Pittsburgh, a major creditor, foreclosed a bond, resulting in the sale of most of St. Clair’s emaining property. The General later said, “They left me a few books of my classical library, and the bust of Paul Jones, which he sent me from Europe, for which I was very grateful.” From a log cabin on Chestnut Ridge to which St. Clair now moved, and which, it is said, was provided by his son Daniel [an Original Member of the Society], he continued petitioning Congress for his various claims. The petty acrimonious debates and comments of the lawmakers are degrading to read, even in late Twentieth Century. It is to the credit of Pennsylvania that an annuity of two hundred dollars was granted St. Clair in 1813, increased to six hundred dollars in 1817. In 1815 Congress finally voted a pension of sixty dollars a month, which was immediately attached by St. Clair’s creditors.

The General’s final state was graphically and sympathetically portrayed in a letter from Elisha Whittlesey, a member of the House of Representatives from Ohio, to United States Senator Richard Brodhead of Pike County, Pennsylvania:

In 1815 three persons and myself performed a journey from Ohio to Connecticut on horseback in the month of May. Having understood that General St. Clair kept a small tavern on the Ridge east of Greensburg [Pennsylvania], I proposed that we stop at his house and spend the night. He had no grain for our horses, and after spending an hour with him in the most agreeable and interesting conversation respecting his early knowledge of the Northwestern Territory, we took our leave of him with deep regret.

I never was in the presence of a man that caused me to feel the same degree of veneration and esteem. He wore a citizen’s dress of black, of the Revolution; his hair was clubbed and powdered. When we entered he arose with dignity and received us most courteously. His dwelling was a common double log house of the western country, that a neighborhood would roll up in an afternoon. There lived the friend and confident of Washington, the ex-Governor of the fairest portion of creation. It was in the neighborhood, if not in view of a large estate at Ligonier, that he owned at the commencement of the Revolution, and which, I have at times understood, was sacrificed to promote the success of the Revolution. Poverty did not cause him to lose self-respect, and were he now living, his personal appearance would command universal admiration.

On 30 August 1818 St. Clair started in a wagon for Youngstown, Pennsylvania, for some supplies. He was found lying in the road, and died the next day without regaining consciousness. Eighteen days after her husband’s death, Mrs. St. Clair also died; she had been mentally unstable for much of her married life. Both lie buried at Greensburg, Pennsylvania, under a monument originally erected by the local Masonic Lodge of which St. Clair was a member, and who gave him burial. The old General is also memorialized by a great many place names, especially in Pennsylvania and in the states carved out of the old Northwest Territory. Arthur and Phoebe (Bayard) St. Clair had seven children of whom the eldest was Lieutenant Daniel St. Clair [an Original Member of the Society]; Elizabeth St. Clair, the fourth child and second daughter, married Captain John Lawrence [an Original Member of the Society].