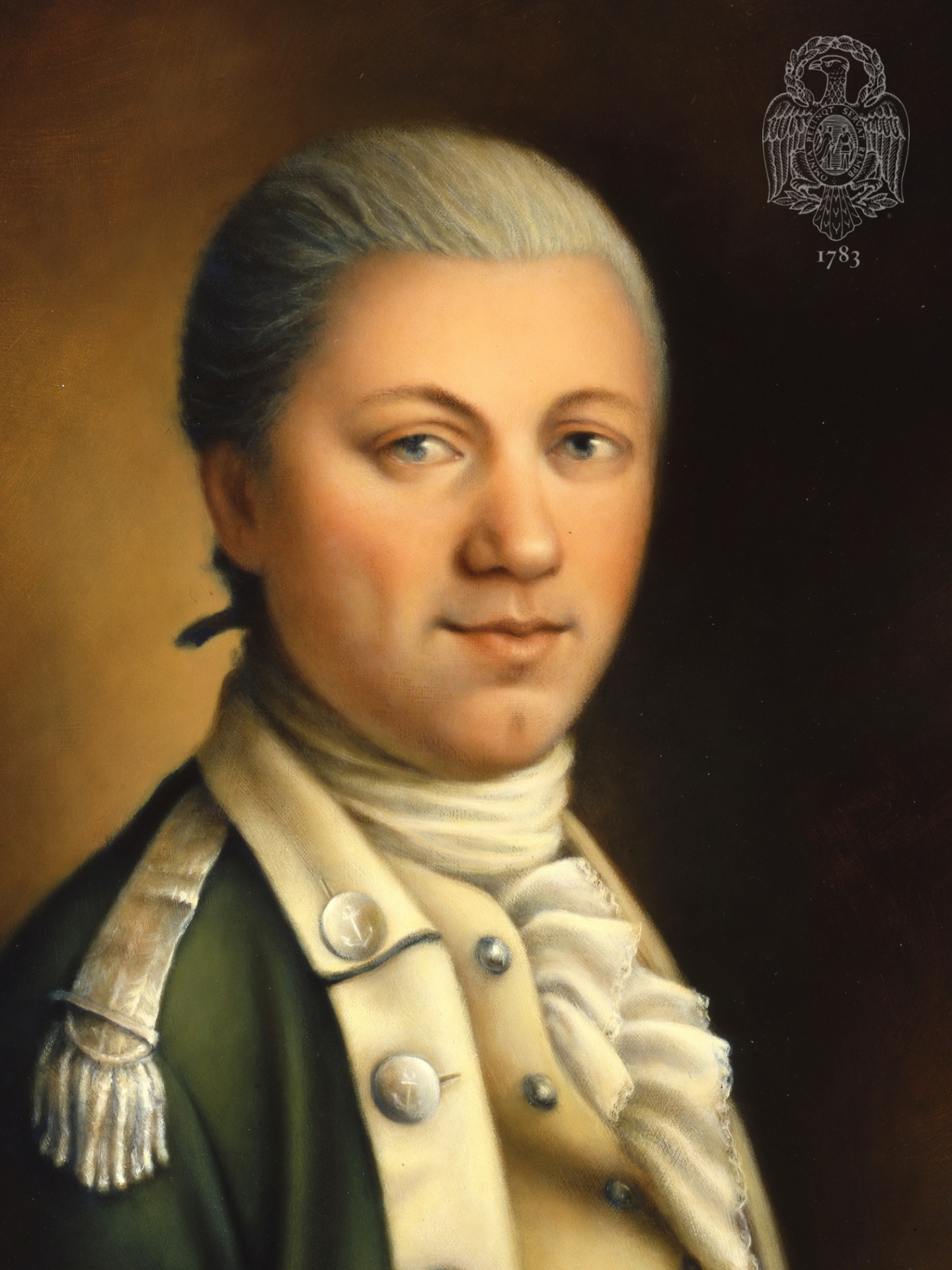 Nicholas was born in Philadelphia about 1744; he was the only son of Anthony and Mary (Shute) (Cowman) Nicholas. Although Anthony Nicholas, who died in 1751, is said to have been a blacksmith, he was so prosperous that Samuel Nicholas was from 1751 to 1759 a student at the Academy of Philadelphia. Moreover, in 1760 Samuel Nicholas became a member of the State in Schuylkill, and in 1766 of the Gloucester Fox Hunting Club, both considered important criteria of provincial social status. Jacob Hiltzheimer the Diarist, of Philadelphia, recorded some activities of the times:

December 26 [1767].-From Rudolph’s, the following gentlemen, Samuel Miles, Levi Hollingsworth, Israel Morris, Joseph Jones, Samuel Nichols [sic], Zebulon Rudolph, and Jeremiah Warder, went to Lower Tinicum fox hunting. There we were met by Charles, Richard, and James Willing, and after riding about the woods until two o’clock, without the sign of a fox, we returned to Joseph Rudolph’s and dined.

Went to Darby to burial of John Rudolph. Israel Morris, Samuel Nichols [sic], Joseph Jones, and myself carried the corpse to the grave in Friends’ ground at Darby [Township, now Delaware County].

One source says that Nicholas sailed as supercargo for Robert Morris and it is true that Morris often showed an interest in Nicholas’ later welfare. The available evidence indicates that Samuel Nicholas enjoyed an enviable and privileged youth.

On 28 November 1775 Nicholas was commissioned Captain, the first officer selected for the two Marine battalions authorized by the Continental Congress on 10 November. Between 6 December and 14 January 1776 Nicholas recruited sixty-two men for service as Marines aboard the twenty-four gun frigate Alfred, Captain Dudley Saltonstall. The frigate was one of the eight vessels comprising the first American fleet commanded by Esek Hopkins. The British then had seventy-eight vessels in american waters. Although ordered to attack Lord Dunmore’s ships in the Chesapeake, Hopkins instead sailed to Nassau, which he captured on 3 March, the Governor and Lieutenant Governor being made prisoners. The attack on the defending forts was led by Nicholas. On returning to the mainland Hopkins’ fleet was intercepted by HMS Glasgow, which inflicted significant damage before escaping. On 8 April Hopkins made port at New London, sent Nicholas to Philadelphia with dispatch-es, and faced a court-martial for disobedience to his orders for the Chesapeake. When Nicholas reached Philadelphia he was detached from the Alfred, promoted to Major on 25 June, and ordered on recruiting service in anticipation of the needs of the thirteen frigates, one from each State, authorized by Congress in December. Nicholas never again went to sea as a Marine.

Like Captains Andrew Porter and James McClure [Original Members of the Society], Major Nicholas was “drafted” by Washington, along with his eighty-man battalion, to take the place of artillerymen lost when enlistments expired. His men were at Assumpink on 2 January 1777 and at Princeton the next day, where artillery played an important part. Nicholas returned to Philadelphia about 1 March. Unlike Porter and McClure, who resigned their Marine commissions to continue as artillerymen, Nicholas remained in his chosen service but until 1779 “he executed orders for the Marine committee and the Board of Admiralty as major of Marines and as muster master.” That is to say, he had to be content with administrative duties.

In 1781 a new frigate, America, was approaching completion at Portsmouth, New Hampshire, John Paul Jones [an Original Member of the Society] was given command as a reward for his great success with the Serapis, and on 10 August Major Nicholas applied for the position as Jones’ Marine officer. Instead, he was ordered to Boston with Tench Francis to convoy to Philadelphia a shipment of specie received from France. This was successfully done, but on 25 August Congress ordered that Nicholas’ accounts be settled and he was effectually retired from the service as of that date. Nevertheless, on 30 November he was appointed to a court of inquiry concerning the loss of the frigate Trumbull, Captain James Nicholson [an Original Member of the Society].

In the Fall of 1782 Nicholas stood as an unsuccessful candidate for Sheriff of Philadelphia County but his major occupation was as a successful innkeeper at the Sign of the Conestoga Wagon in High [Market] Street, Philadelphia. The inn was owned by Nicholas’ mother-in-law and enjoyed a favorable location and a prosperous trade, but like many other officers Nicholas was engaged in a long struggle to recover his naval “pay and emoluments”. He had petitioned Congress in 1781, stressing that the long land service to which he had been ordered had cut him off from the benefits of prize money for ships and cargo taken at sea. On 28 April 1783 he joined with other Navy officers in memorializing Congress yet again for pay. On 16 August 1784 Nicholas, on his own behalf and that of Joseph Hardy, Robert Mullen and Dennis Leary, memorialized the “Representatives of the Freemen of Pennsylvania”:

…your Memorialists are respectively Inhabitants of this State, and did engage themselves at the earliest period (in the Year 1775) of the War in the Navy of the United States and were Commissioned as Captains of Marines in said Service.-

That your Memorialists conceive themselves entitled to similar emoluments in respect of Pay & Lands with the officers of the late Pennsylvania Line; That your Memorialists are told, that your Honorable House on the Petition & application of Captain Barry & Others did agree to place the said Captain Barry & others on the same footing precisely with Officers in the Line who are Inhabitants of this State.

Your Memorialists therefore humbly think that they should possess the same advantages and Pray that they may be included in the Report of the Committee of Your Honorable House on Captain Barry’s petition, and have all the benefits arising therefrom.

The General Assembly agreed on 18 August that this was just, and the bill was transcribed and printed for public consideration.

When Samuel Nicholas signed the “Parchment Roll” of the Society of the Cincinnati of Pennsylvania sometime in the Fall of 1783, he no doubt shared the thoughts of his fellow-officers that the organization would be helpful in recovering rights and privileges promised them when they accepted commissions. The idea proved to be illusory, but Nicholas did not lose his enthusiasm for the organization and from 1785 to 1788 he served on their Standing Committee, having been appointed to take the place of Lewis Nicola [an Original Member of the Society]. The Minutes of the Society of the Cincinnati of Pennsylvania rarely state the specific locations of their meetings, but occasionally amention is made, and the “Conestoga Wagon” was certainly one of the meeting places. Nicholas was also an active member of Lodge Number 13, Ancient York Masons. Speculations in real estate on South Broad Street, Philadelphia, were profitable.

Nicholas had married at a Quaker ceremony in 1778 Mary, the daughter of Charles Jenkins, Innkeeper, and his wife Mary Gray. On 10 October 1784 Nicholas became the brother-in-law of Lt. Colonel Josiah Harmar [an Original Member of the Society] who married Sarah Jenkins at “Old Swedes'” Church, Philadelphia on that date. Nicholas died in Philadelphia on 27 August 1790 and the next day his old friend Jacob Hiltzheimer wrote in his diary,

Forenoon attended the Assembly; in the afternoon Mr. [Jacob] Barge and I went to the burial of Samuel Nicholas in Friend’s ground, Arch Street.

As was often the case with Friends’ burials, there was no stone to mark the grave. The children of this marriage surviving in 1792 were Sarah, Samuel, Nicholas, Charles Jenkins, William, and Mary Jenkins Nicholas. Mrs. Nicholas survived until 1818 and in her will named her children Samuel, Charles and Mary J. Nicholas; son Captain William Nicholas, U. S. Navy died in November 1816. In 1802 Samuel Nicholas, Jr. succeeded to his father’s membership in the Society of the Cincinnati of Pennsylvania.